VaxxTracker gives people a safe place to report symptoms they believe resulted from a vaccine.

The numbers have been interpreted from incidents reported in the VAERS database operated by the US HHS, combined with events reported at VaxxTracker.com.

Entries reported in VaxxTracker cannot be used to determine if a vaccine caused or contributed to an adverse event or illness. The reports may contain information that is incomplete, inaccurate, coincidental, or unverifiable.

**VAERS (Vaccine Adverse Event Reporting System) is the USA’s early warning system that monitors the safety of vaccines after they are authorized or licensed for use by the U.S. Food and Drug Administration (FDA).

** Not to be used for scientific study.

For consumers and healthcare professionals who are eligible to report to VAERS, we also recommend reporting to this system, as the centers for Disease Control and Prevention (CDC) are monitoring the adverse events reported to VAERS. All users of VaxxTracker can view charts and graphs illustrating the types of symptoms being reported, as well as the number of symptoms associated with specific vaccines and other trends 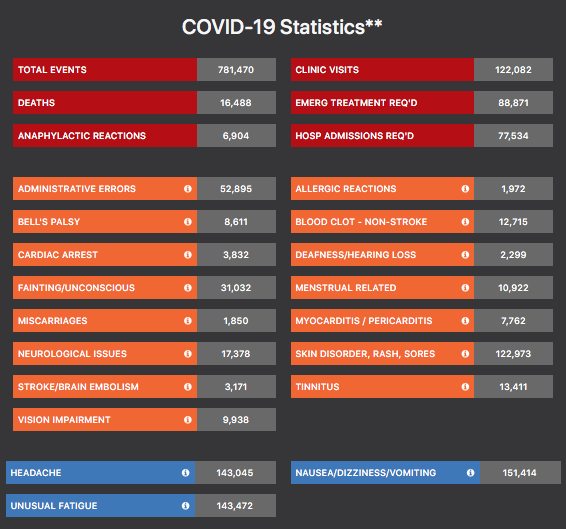 To proceed, the following unique 6-digit code must be entered: 236888

Click here
The VaxxTracker portal that is specifically for healthcare professionals offers the following features:

The purpose of VaxxTracker is to provide the global public with truthful information about adverse reactions to the COVID vaccines, in particular. To achieve this, we need your support:

Data released Friday by the Centers for Disease Control and Prevention (CDC) showed that between Dec. 14, 2020 and Oct. 8, 2021, a total of 798,636 adverse events following COVID vaccines were reported to the Vaccine Adverse Event Reporting System (VAERS). The data included a total of 16,766 reports of deaths — an increase of 456 over the previous week, and two more reports of teens who died after being vaccinated.

There were 117,399 reports of serious injuries, including deaths, during the same time period — up 5,478 compared with the previous week.

The data come directly from reports submitted to VAERS, the primary government-funded system for reporting adverse vaccine reactions in the U.S.

Every Friday, VAERS makes public all vaccine injury reports received as of a specified date, usually about a week prior to the release date. Reports submitted to VAERS require further investigation before a causal relationship can be confirmed.
Historically, VAERS has been shown to report only 1% of actual vaccine adverse events.

The most recent death involves a 15-year-old male who died six days after receiving his first dose of Pfizer’s COVID vaccine. According to his VAERS report (VAERS I.D. 1764974), the previously healthy teen complained of brief unilateral shoulder pain five days after receiving his COVID vaccine. The next day he played with two friends at a community pond, swung on a rope swing, flipped into the air, and landed in the water feet first. He surfaced, laughed and told his friends “Wow, that hurt!” He then swam toward shore underwater, as was his usual routine, but did not re-emerge.

An autopsy showed no external indication of a head injury, but there was a small subgaleal hemorrhage — a rare, but lethal bleeding disorder — over the left occiput. In addition, the boy had a mildly elevated cardiac mass, increased left ventricular wall thickness and small foci of myocardial inflammation of the lateral wall of the left ventricle with myocyte necrosis consistent with myocardial infarction.

Another recent death includes a 16-year-old female (VAERS I.D. 1757635) who complained of fatigue and died one day after receiving Pfizer’s COVID vaccine.

According to CNBC, an advisory panel to the U.S. Food and Drug Administration (FDA) today unanimously voted to recommend J&J’s single-dose COVID vaccine to the more than 15 million Americans who have already received the first dose.

The panel recommended boosters for everyone 18 and over, at least two months after they received the first dose.

Many committee members said it should be considered a two-dose vaccine, much like the Moderna and Pfizer vaccines.

On Thursday, the FDA’s advisory panel unanimously recommended booster doses of Moderna’s COVID vaccine for Americans 65 and older and those at high risk of severe illness or occupational exposure to the virus, Reuters reported.

“The data itself is not strong, but it is certainly going in the direction that is supportable of this vote,” said Dr. Patrick Moore of the University of Pittsburgh School of Medicine. Moore said he voted in favor of Moderna boosters based largely on a “gut feeling rather than truly serious data.”

If the FDA signs off on the panel’s recommendation for booster doses of J&J and Moderna’s COVID vaccines, the CDC will make specific recommendations on who should get the shots. The CDC’s vaccine advisers are scheduled to meet next week.